Andromi is a narrative-driven adventure game concept I began working on in 2014, immediately after finishing the predecessor to SLARPG. Its development is currently paused indefinitely (more on that below). It'll likely be pretty different if and when I ever decide to make it for real, but I figure it's worth archiving the old concepts here.

Set on a future version of Earth inhabited by animal people, sudden technological advancements and the discovery of other habitable planets have led to much of the planet's population relocating to space. People still live on Earth, but it's quieter, its landscapes littered with monuments to the space age.

The story would follow the adventures of two characters: 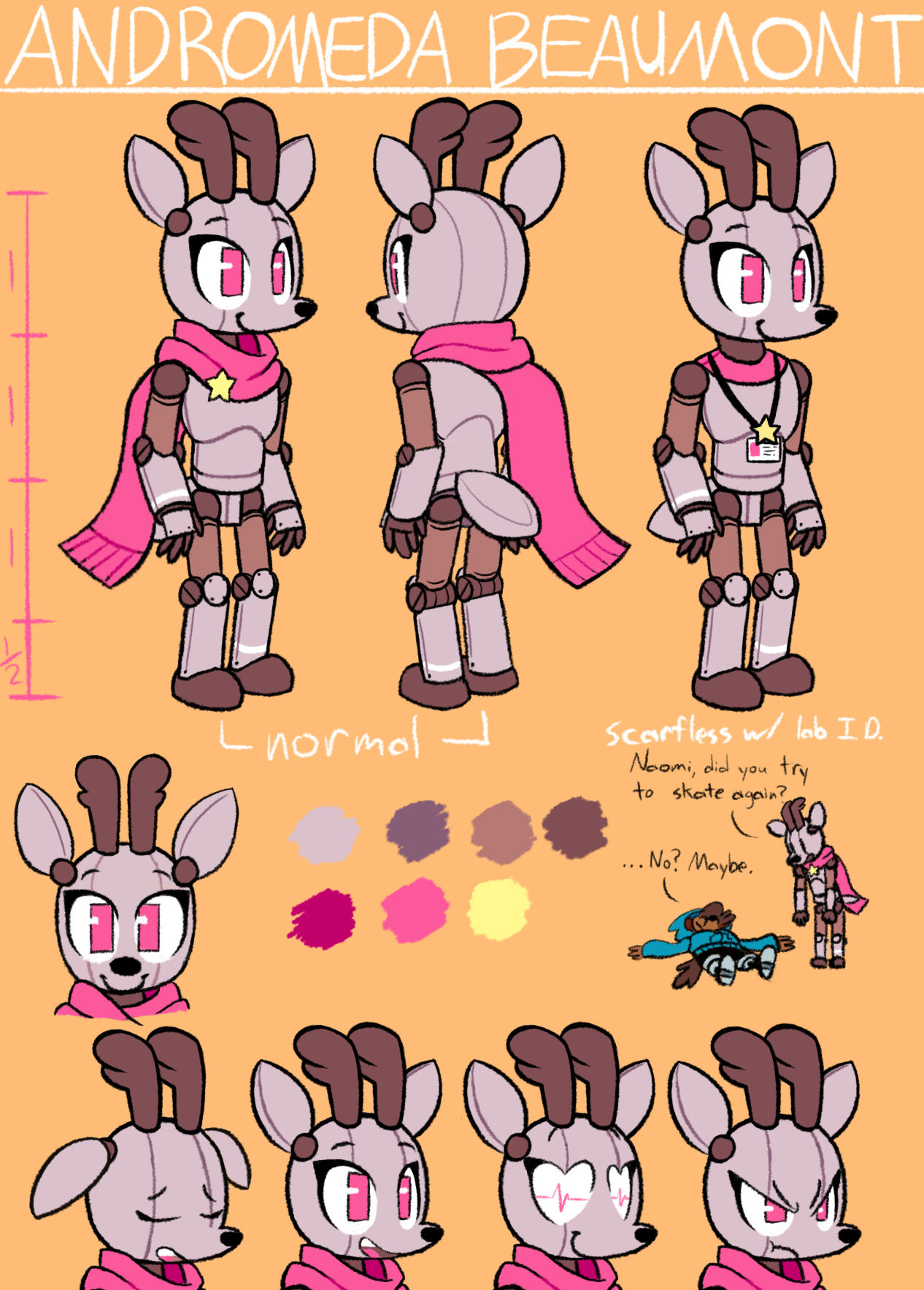 Andromeda Beaumont is a cheerful robotic reindeer designed by Dr. Margaret Beaumont (an alpaca). Originally created for space exploration, Andromeda was instead left behind on Earth for reasons that no one will explain to her. Tired of being cooped up in the lab at Lyndhurst Industries 24/7, Andromeda decides to set out on an adventure with her girlfriend Naomi to prove her worth and show the world that she's more than a childish daydreamer by helping strangers with their various problems. 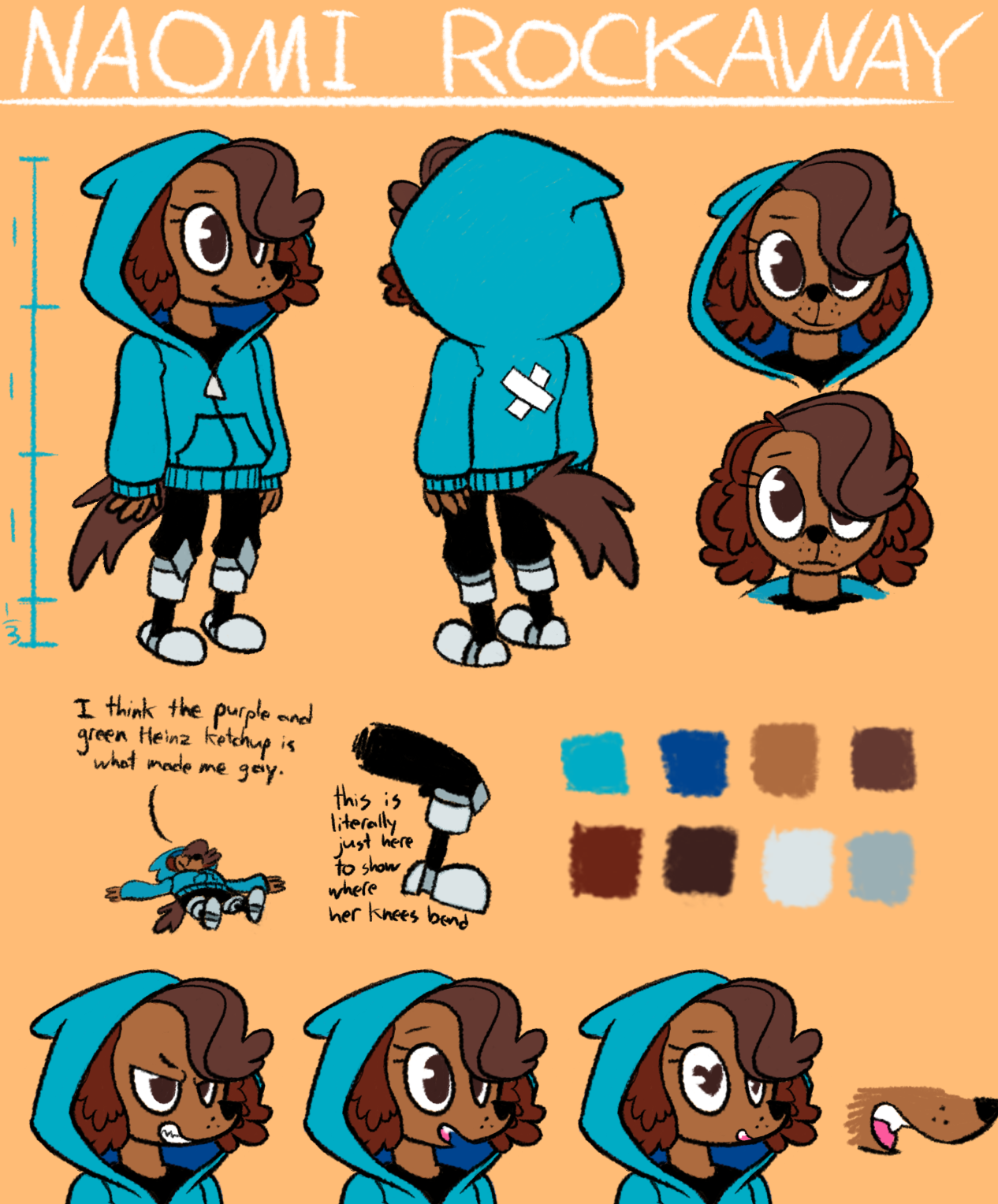 Naomi Rockaway is a 23-year-old trans girl from the big city, and she also happens to be a dog. After an accident a couple years ago, Naomi was given robotic prosthetic legs at Lyndhurst Industries. She then used this as an opportunity to beg for a job and a place to stay on the company campus so she could run away from home. People generally see Naomi as a sarcastic slacker who’d rather screw around all the time than make anything of herself, but she knows that she has more potential than that. She just doesn’t know what she wants to do with her life yet. But maybe tagging along with her robot girlfriend Andromeda on her adventure will give her the opportunity to finally figure herself out - or at least keep Andromeda from getting herself killed.

Andromi was orginally envisioned as an adventure game of sorts - or maybe it's easier to picture it as an RPG with no combat, just exploration and dialogue. The story would see Andromeda and Naomi traveling across their home state (somewhere vaguely in the northeastern United States) and picking up side quests from all sorts of colorful characters. Inspired a bit by Kentucky Route Zero, the player would have the opportunity to choose branching dialogue options for both Andromeda and Naomi. The two would also offer different solutions to many problems, with Andromeda tending to be more idealistic and Naomi being more practical.

Below are some early pieces of concept art from 2014-2015 in which I explored the look of Andromi's world. (Click for full size.) 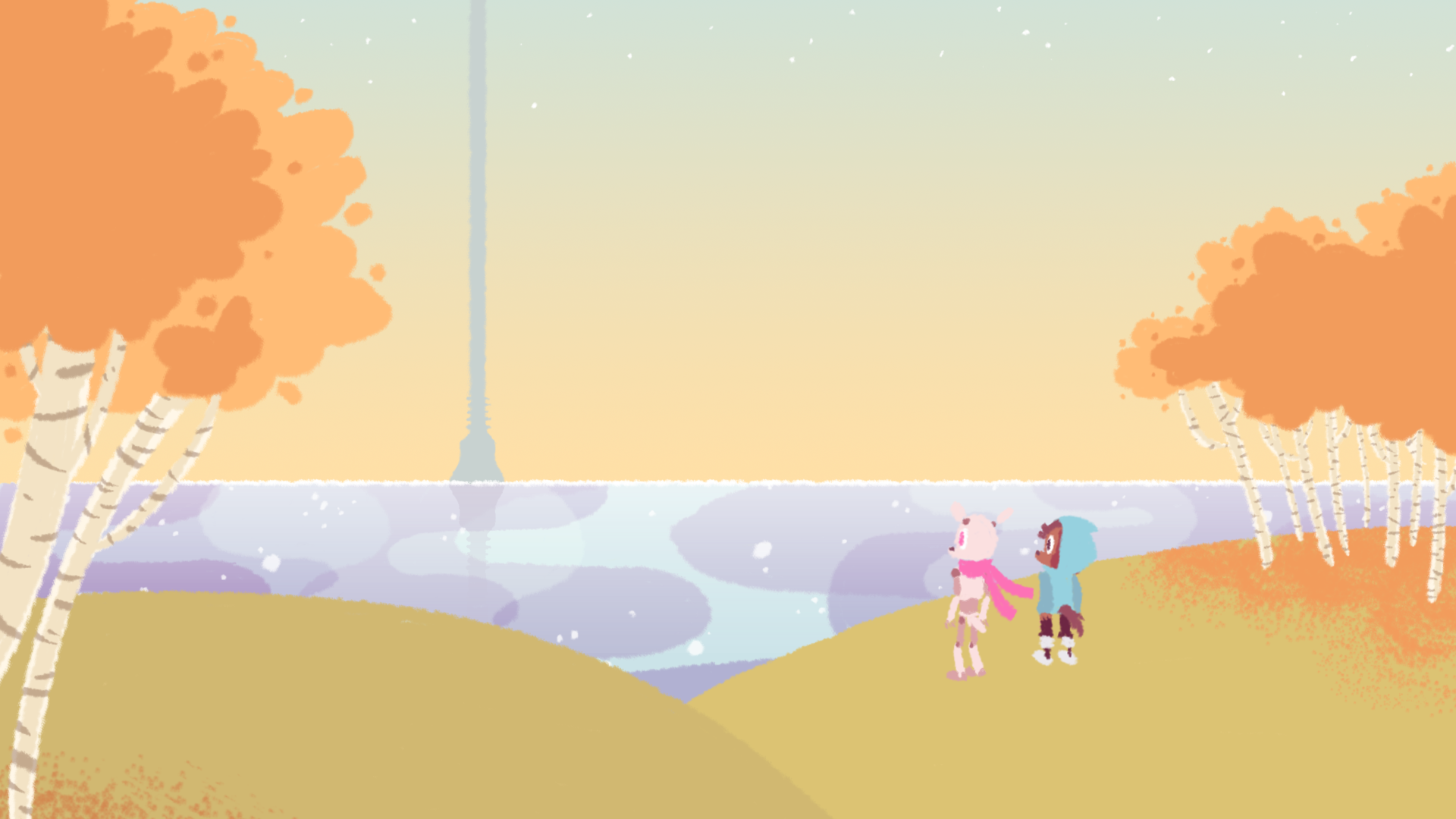 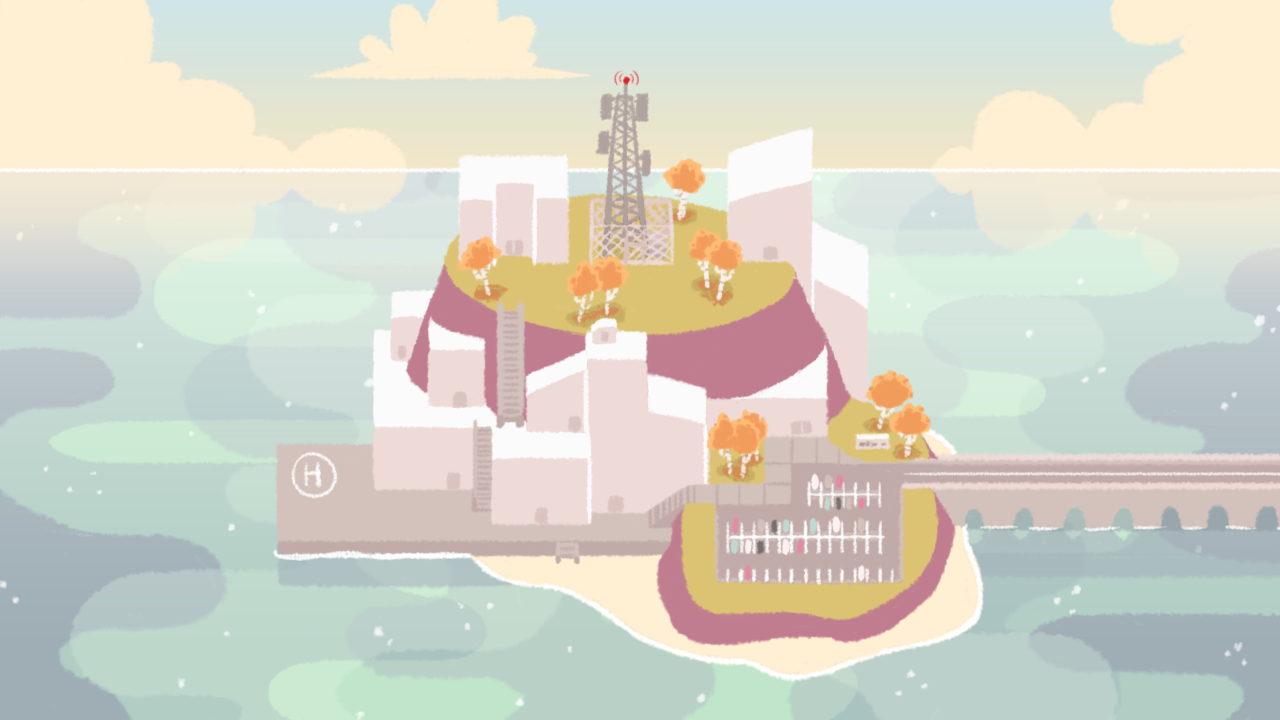 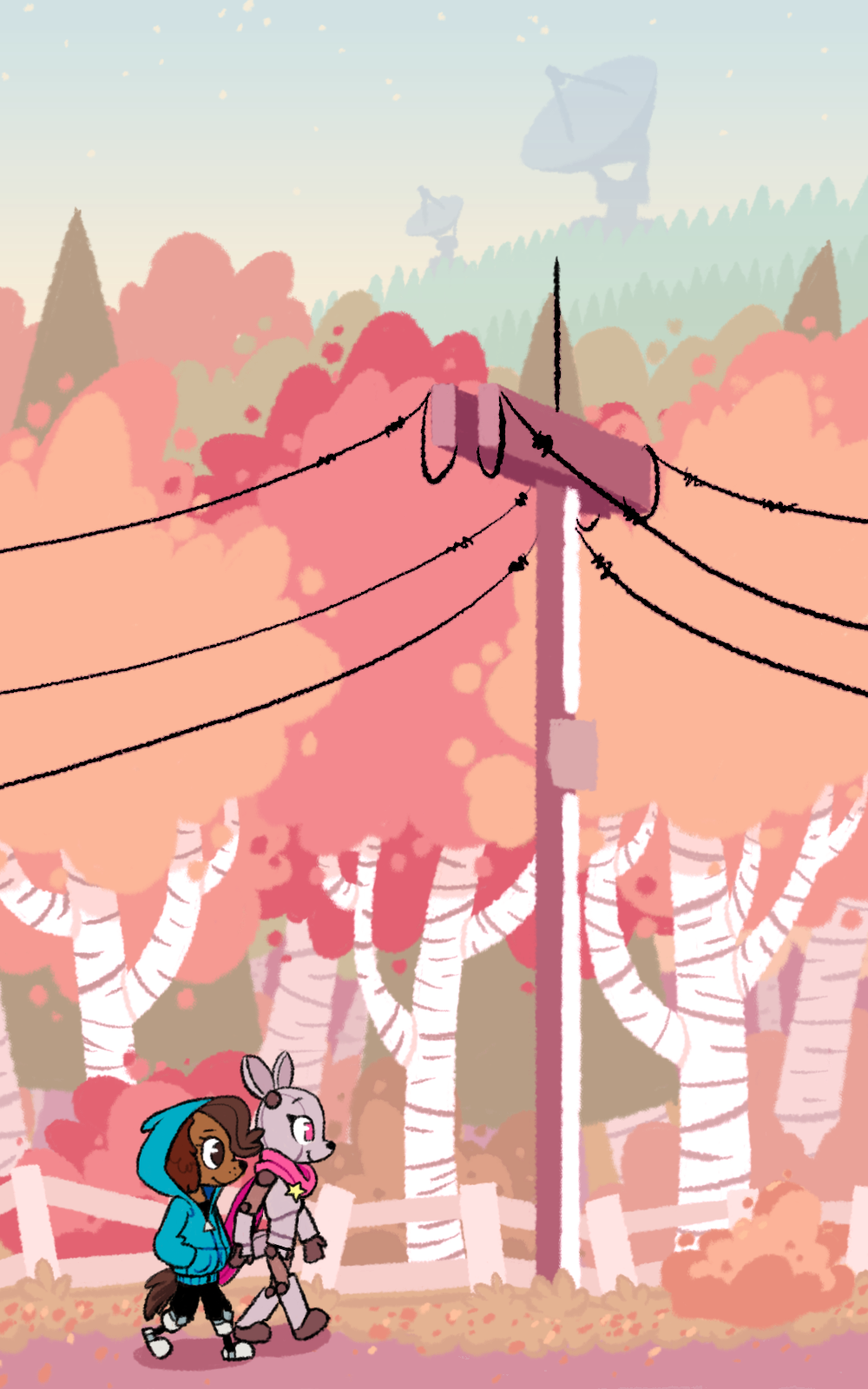 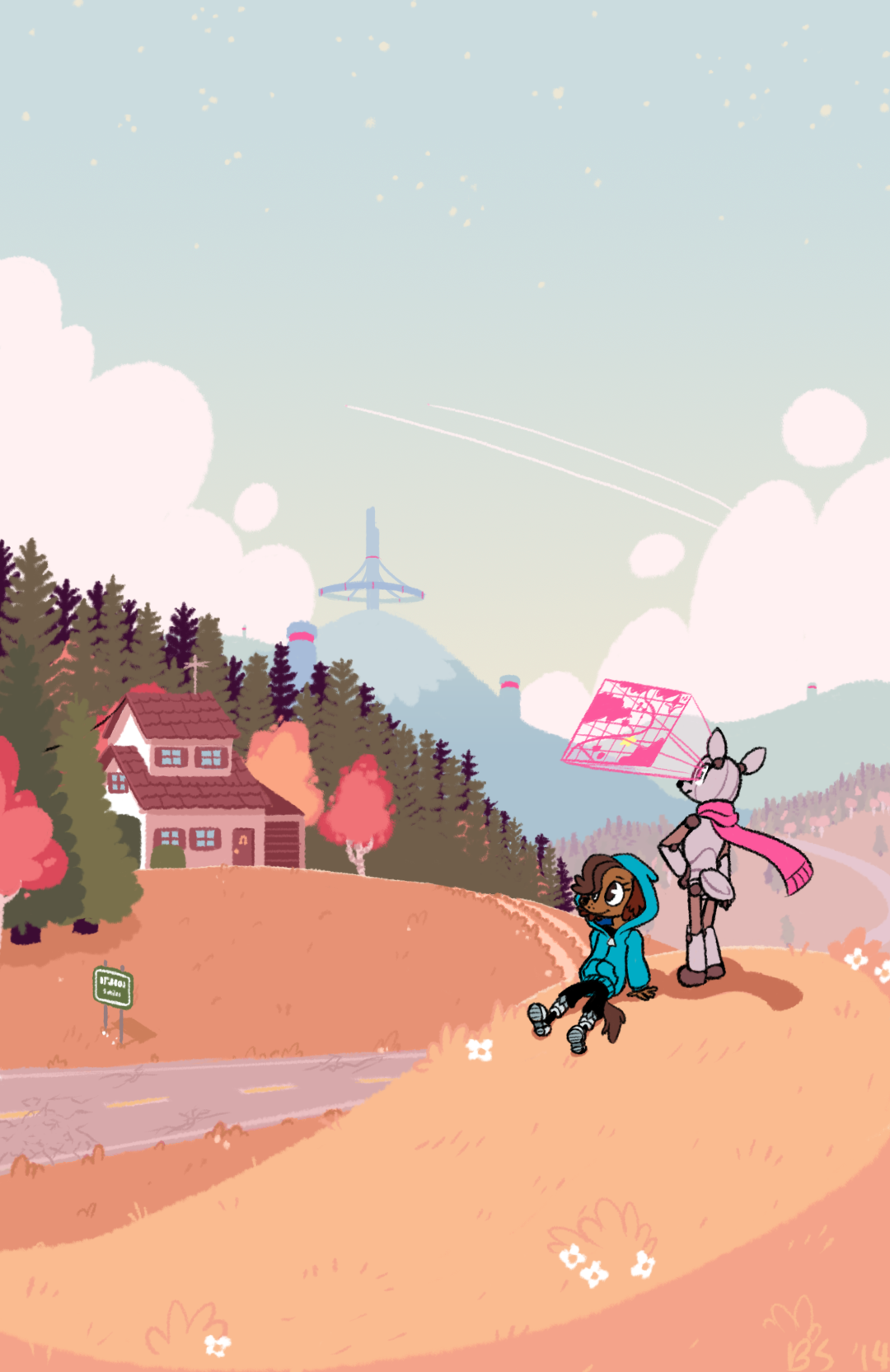 (Andromeda doesn't have antlers in a bunch of these because it took me a while to decide she was a reindeer and not a deer deer.)

I also have some sprite work and in-game scenery tests: 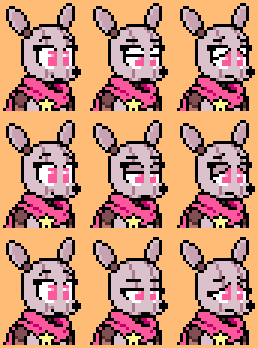 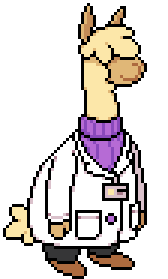 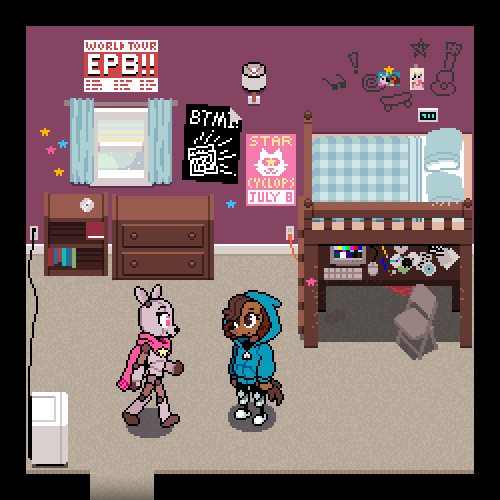 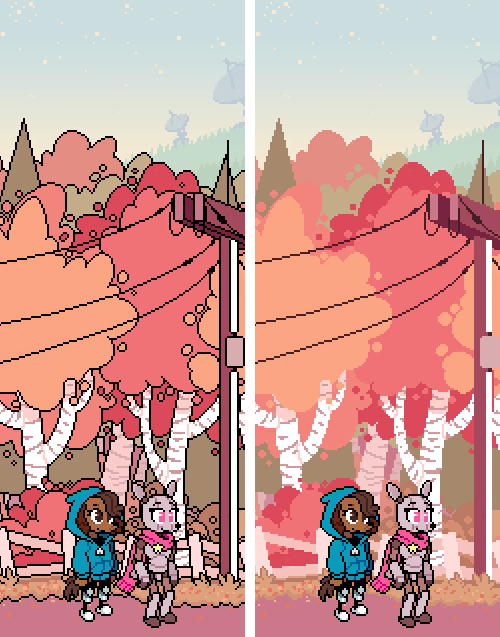 A lot of things happened! The main problem was that I jumped straight from making a relatively small RPG Maker game to telling myself I could make a sprawling open world narrative adventure thing in Unity all by myself with minimal coding experience at age 20, and I burned out extremely quickly. I spent too much time planning things out before even writing my first line of code. I also announced the game as soon as I had some concept art to share, eager to move on to my next game immediately to stave off the post-project depression and keep people invested in my game dev work. For about a year and a half I struggled with depression in the face of the massive marble slab in front of me, not knowing how to chip away at it and make it the game I saw so perfectly in my head. At the time I also didn't yet know that I probably have ADHD, which meant that my brain and my ability to focus just fucking shut down when making an adventure game in Unity didn't click for me right away like RPG Maker had in the past.

In an effort to dig myself out of that hole, I started tinkering around with a revamp of my first RPG Maker game as a side project in 2015... which soon turned into SLARPG, my main artistic focus for most of my 20s. (Thanks Ken Penders was also born out of this period of burnout in late 2014 - I needed a distraction so I'd feel productive despite my inability to make any progress on Andromi.)

I've also rethought the concepts a lot in the years since Andromi was put on hold. For one, many of the thematic ideas and character arcs I wanted to tackle in Andromi ended up in SLARPG instead. To anyone familiar with SLARPG, I think that's obvious even from reading the character descriptions for Andromeda and Naomi. Those were simply the things on my mind in my early 20s. If I was to start over on Andromi today as an older and theoretically wiser person, it may end up being pretty different.

There was also this little game you may have heard of called Night in the Woods. That ended up coming out while I was working on SLARPG, and it touched on a lot of the thematic elements I wanted to write about in Andromi that didn't make their way into SLARPG. The vibes in the world of Andromi were inspired in part by living in a town hit hard by the 2008 recession, with businesses closing left and right and people moving away, and exploring the lives of the ordinary folks trying to make the most of things in spite of all this. That's... basically the entire heart and soul of NITW? Between that, the dialogue-focused adventure game format, the furry characters, the autumn setting, and more, Andromi would probably come off as just a sci-fi version of NITW with more romance.

All that being said, the characters and concepts I came up with for Andromi are still dear to me. I would still like to revisit these ideas someday. I'm not exactly sure when, especially since I don't think I want to immediately jump into another huge narrative-driven game after spending seven years making SLARPG. But someday...